Core Documents of Our Democracy: United States Statutes at Large 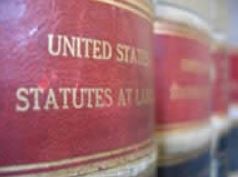 The United States Statutes at Large containing the permanent laws – public and private – that were enacted during each session of Congress.

The SuDoc classification number is AE 2.111:
This resource is available in PRINT and ONLINE

About the United States Statutes at Large

The private firm, Little, Brown, and Company, began publishing the Statutes at Large in 1845 under authority granted by a joint resolution of the 28th Congress. In 1874, the authority to publish was transferred to the U.S. Government Publishing Office under the direction of the Secretary of State. In 1950, the Department of State's responsibility for publishing the Statutes at Large was transferred to the General Services Administration and the OFR. Upon the establishment of NARA in 1985, the Archivist of the United States was given the authority to publish the Statutes at Large, acting through the OFR and the Congressional Printing Management Division of GPO.

Under the provisions of 1 U.S.C. 112, the printed edition of the Statutes at Large is legal evidence of the laws, concurrent resolutions, proclamations by the President, and proposed and ratified amendments to the Constitution.

The Statutes at Large collection on govinfo includes volumes from 1951 forward.

Statutes at Large on govinfo (1951-Present)

You can find and search the Statutes at Large by:

Search by Keyword – For example, documents with compensation in the full text of the publication.

Search by Popular Name – For example, documents with The Patriot Act as the popular title.