In the Beginning: the First Van Cliburn International Piano Competition, 1962: The Russians are coming

The "Russians" in the first Van Cliburn International Piano Competition actually came from different parts of the Union of Soviet Socialist Republics, or U.S.S.R.  While the majority viewed these young pianists with affection and admiration - sentiments returned by the Soviets - hints of Cold War tension occasionally surfaced.

The Soviets, gifts and American-style shopping

No crisis - but some controversy

It was mistakenly thought that the Soviet pianists would have to stay in a hotel rather than host residences, like the other contestants (No East-West Crisis; Russia Comes to Fort Worth).  That notion was quickly dispelled, and a happy exchange of cultures took place.  A comment by pianist Mikhail Voskresenski, however, may have unnerved some Americans, whose children practiced "duck and cover" drills in school (Why Worry About Cuba Arms?).

Along with other stories in Korth, Hume Helped Grace Lankford... is a reference to threatening mail received by Lankford, reflecting Cold War angst:

That same founding year, Grace Lankford received huge quantities of mail on every subject related to the competition.  While most of it was supportive and friendly, there was a small amount, probably inevitable, of hate mail, including one unsigned letter that said, "If a Russian wins this contest, you are dead!" 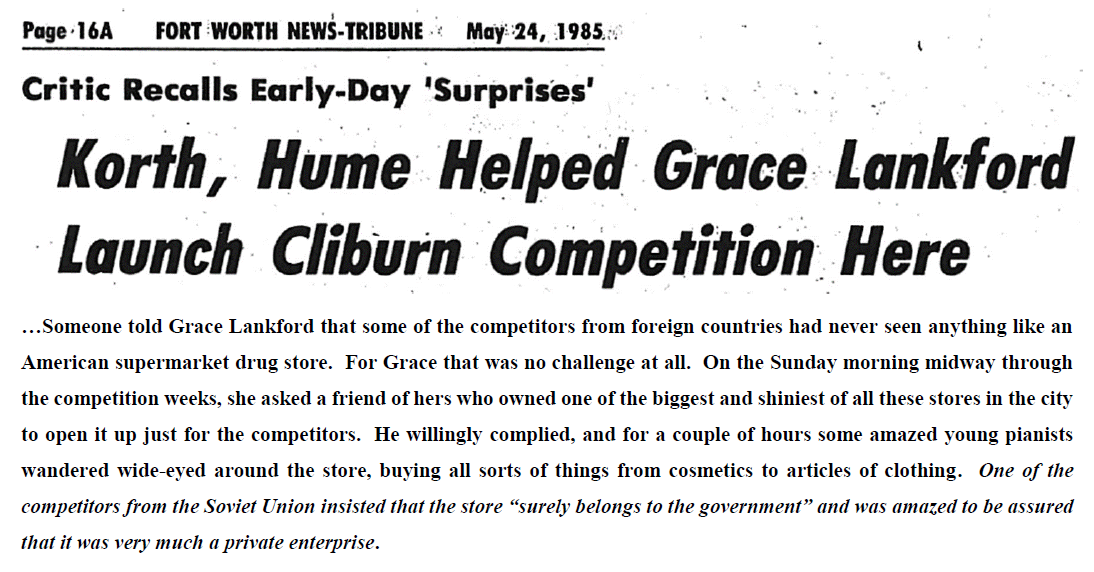