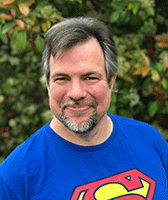 A. Lee Martinez has been a traditionally published fantasy novelist for 15 years. His first novel, Gil's All Fright Diner, received an Alex Award from the American Library Association. His third novel, A Nameless Witch, received The Amelia Bloomer Award. His current project, the Constance Verity Trilogy, has been optioned for film by Legendary Pictures. Martinez is known for his love of mixing classic pulp fiction adventure, noir, and horror with comic sensibilities and describes his style as Saturday Morning Humanism.

Dave Aftandilian is associate professor of anthropology and director of the Human-Animal Relationships (HARE) minor at Texas Christian University. He also chairs the Tarrant County Food Policy Council’s Working Group on Community Gardens and Urban Agriculture. He is the editor of What Are the Animals to Us? Approaches from Science, Religion, Folklore, Literature, and Art (Tennessee, 2007) and coeditor of City Creatures: Animal Encounters in the Chicago Wilderness (with Gavin Van Horn; University of Chicago Press, 2015) and Grounding Education in the Environmental Humanities: Exploring Place-Based Pedagogies in the South (with Lucas F. Johnston; Routledge, 2019). His research and teaching focus on food justice, animals and religion, Native American religions and ecology, and contemplative practices and pedagogies.

Larry Atchley Jr writes mainly fantasy, science fiction, horror, and poetry. He has 11 short stories and 2 poems published in various anthologies and is presently working on a couple of fantasy novels. He performs under the persona Lars Shortshanks with The Seadog Slam / Steamdogs, a troup which recites poetry at pirate and Steampunk themed shows.

He lives in the Dallas/Fort Worth Metroplex with his wife Alison, who is an artist, writer, and teacher, and his artistically creative step daughter Leila. His oldest daughter, Alina is an artist and crafter of handmade candles, soaps, oils, and jewelry.
His blog is at larryatchleyjr.wordpress.com and he can be found on Facebook and on his Amazon author's page.

Baldwin was born and reared in Fort Worth, Texas, amid the olfactory cornucopia formed by its stock yards, rendering plants, and chemical factories. His youth was spent exploring the fossil strewn hills of North Texas. Much of Mr. Baldwin’s writing stems from an early and enduring love of nature and his exploration of it through science, particularly astronomy. As a youth he built a Newtonian telescope and followed the progress of the space program closely, hoping to become an astronaut. But the eyes weren’t 20 twice, so he became a writer of poetry, science fiction, plays, mystery thrillers, and children’s books, which is somewhat safer and often quite exciting.

Mr. Baldwin holds a B.A. in Political Science, a Masters degree in Public Administration (TCU), and a Masters in Library Science. His career has primarily been that of a public library administrator, but he has also been a field operations supervisor for the U.S. Census, and a professor of American Government. Baldwin is the author of 14 books, including 4 volumes of science fiction short stories, a mystery thriller, a book of flash plays, a children's science adventure book, and 5 books of poetry.

Baldwin has maintained a longtime interest in neuroscience and developed two seminars based on neuroscience. He also presents seminars on Easy Self-Publishing and How to Produce Book Trailer Videos as well as several seminars on poetry. He and his wife, Helen, reside in Benbrook, Texas.

Julie Barrett is a writer, photographer, and maker of interesting things from Plano, TX.  She is also a founding member of The Generic Radio Workshop, member of the Dallas Future Society board, and sells photography and art through SteamCat.net. Julie writes short stories, radio plays, and whatever else helps pay the bills. She hates the bills. Find her at Stately Barrett Manor or on Facebook.

Award-winning ex-Minnesota journalist Carole Nelson Douglas was the first woman to write for the annual all-male annual Gridiron skit show, attend it, and then chair it, and the first woman elected to the Newspaper Guild board and to join the paper's Opinion Pages and Editorial board. She moved to Fort Worth to write fiction full-time after two high fantasy novels were "surprise" half-a-million copy bestsellers. Since 1984 she has written more than fifty contemporary and historical mystery/suspense novels.

The first woman to write a Sherlock Holmes spin-off series, and first to use a woman protagonist, she reinvented Holmes frenemy Irene Adler as a detective, earning a NYT Notable Book of the Year citation and two mystery awards . Going doubly Noir, Douglas cast a real stray black cat, Midnight Louie, PI, as an intermittent narrator shepherding four pro-am human detectives through thirty-three mysteries. Her books have made many national bestseller lists, including USA Today.

Her writing blends strong women (men too), genres, social issues, satire, and substance. Midnight Louie's new Café Noir series debut, Absinthe Without Leave, is a mystery with a twist of paranormal and Douglas's 63rd published novel. She lives in Fort Worth with her husband, computer, and several rescue cats.

Rhonda Eudaly lives in Arlington, Texas where her wide variety of experience and skills is well-suited to her current job in local government. She's married with dogs and an increasing horde of writing instruments – which she blogs about.

Rhonda has a well-rounded publication history in all kinds of writing including novels, collaborations, and short stories. Check out her website - www.RhondaEudaly.com - for her latest publications and downloads.

Brad W. Foster is an illustrator, cartoonist, writer, publisher, and whatever other labels he can use to get him through the door! He’s won the Fan Artist Hugo a few times, picked up a Chesley award, and turned a bit of self-publishing started thirty years ago into the Jabberwocky Graphix publishing empire. His strange drawings and cartoons have appeared in over two thousand publications, half of those science fiction fanzines, where he draws just for the fun of it.  Most recently, he was Artist Guest of Honor at the Worldcon in 2015.

On a more professional level Foster has worked as an illustrator for various genre magazines and publishers, the better known among those being AMAZING STORIES and DRAGON. In comics he had his own series some years back, THE MECHTHINGS, and he even got to play with the big boys of comics for a few years as the official Big Background Artist of Image Comic’s SHADOWHAWK.

Known throughout the world (though most of the world doesn’t know it yet) for his intricate pen and ink work, it is possible you’ve seen more of his work in titles as varied as CAT FANCY, CAVALIER, or HIGHLIGHTS FOR CHILDREN. Most recently he has discovered color, and has completed covers for publishers  Yard Dog Press, Zumaya, and Dark Star, plus still doing those old-fashioned black and white illustrations for magazines such as SPACE & TIME and TALEBONES.

Karl K. Gallagher is an engineer at a major aerospace company. Previously he calculated trajectories for a commercial launch rocket start-up and designed and operated weather satellites. Karl lives in Saginaw, TX with his family. His books Torchship, Torchship Pilot, and Torchship Captain are available on Amazon and Audible.

Aerospace engineer and tech startup founder Wil McCarthy, formerly of WIRED and SyFy, is a two-time winner of the AnLab award.  He’s been nominated for the Nebula, Locus, Seiun, Sturgeon and Philip K. Dick awards, and Discover rated his imaginary world of “P2/Sorrow” one of the 10 best fictional planets of all time.  He has appeared in Analog and Asimov's, and his occasionally bestselling novels include New York Times Notable BLOOM, Amazon.com "Best of Y2K" THE COLLAPSIUM, and newly released ANTEDILUVIAN.  He has also written for TV and video games, and published nonfiction.  McCarthy holds 31 issued U.S. patents.

Bret McCormick is a writer, artist and filmmaker from Bedford, Texas. From 1984 to 1996 he was the most prolific feature film producer working in Texas. His low-budget splatter epic, The Abomination, maintains a small, but avid cult following internationally. In 2019 McCormick edited two anthologies of horror fiction: Road Kill Volume 4 and The Toilet Zone. His novel Skin Dreams was published by Hellbound Books in October 2019. The Horror Writer: A Study of Craft and Identity in the Horror Genre edited by Joe Mynhardt features McCormick's essay "The Seven Steps to Mastery for Horror Writers."

Critically-acclaimed author Nicholas McIntire has been writing fantasy since he was 8 years old. The bones of the Archanium Codex were first created when he was 16, and in the past 20 years he has taken that initially simple idea and crafted it into a fully realized world, finished the sequel, earned three degrees (one in Russian, Eastern European Studies, two in Nursing), and lived life to its fullest. Now writing full-time, Nicholas is ready for his debut, The Hunter's Gambit. He lives in Fort Worth, Texas.

Stephen Patrick lives in the heart of Texas where he spins stories in genres ranging from science fiction and horror to historical and everything in between. His work can be found in Road Kill: Texas Horror by Texas Writers, Vol 2. His latest book, The Holocaust Engine, part one of the trilogy of the same name with David Rike, will be released in May,2020.

One of the most fascinating people in Dallas  (The Dallas Observer 2018), Creator of El Peso Hero and CoFounder of Texas Latino Comic Con. El Peso Hero is a comic book heavily influenced by the modern-day challenges people from both sides of the U.S.-Mexico border face. The main story is centered on El Peso Hero, a rogue hero who is standing up against Mexico’s cartels, corrupt officials, and human traffickers. El Peso Hero has been one the most internationally talked about Latino superhero in decades. With modern social issues such immigration, human trafficking, and institutional corruption, El Peso Hero have garnered attention and praise from the Latino community and been featured on American Way Magazine, Univision, CNN, Telemundo, NPR, CBS, NBC and countless of other media sites worldwide.

Known to her kids as "Indiana Mom", Mel. has gone back to school to become "Dr. Indiana Mom."  She still works on fossils for the Museum of Nature and Science, and is now a volunteer educator at Trinity River Audubon Center as well as a Texas Master Naturalist. She's also a proud member of the Yard Dog Press gang, with a story in A Bubba in Time Saves None.